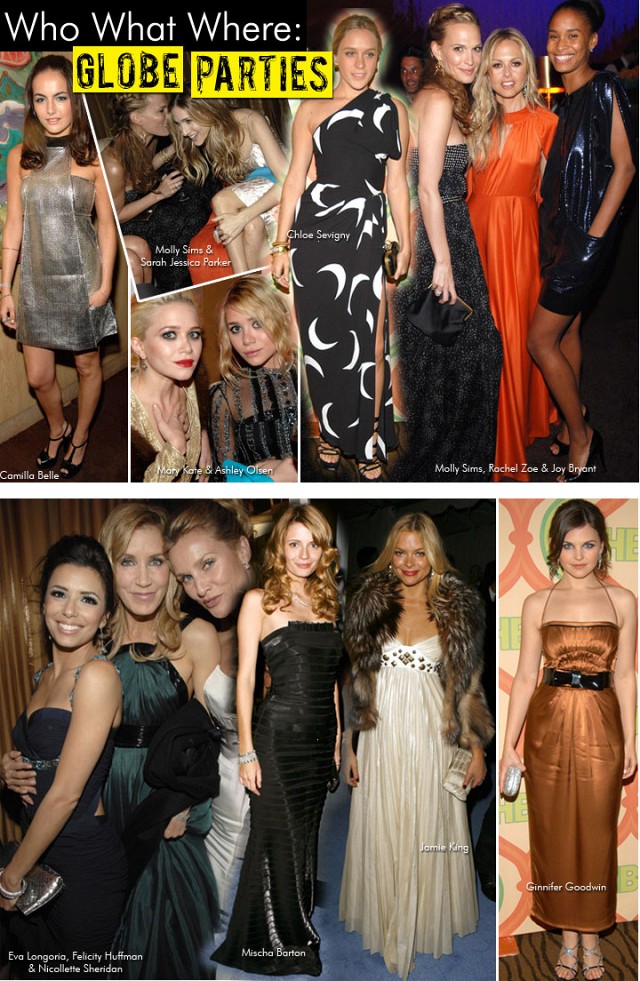 We’re a little fashion-focused, duh, and so we spent all yesterday watching re-runs of E!’s coverage of the Golden Globes. For you, dear readers, we wanted more, so we searched for some of the evening’s unseen shots and got you the goods on celebrity style secrets. All of the above images come from the night’s big after parties (In Style, HBO, Weinstein); though reportedly the major fun went down at mega-agency CAA’s fete, held at Tower Bar.
Cameras-we hear-were not allowed, sadly. Nonetheless, for gowns galore and heels details, read on!

First up? Camilla Belle at the In Style party wearing a Fendi dress and
shoes, carrying a Gucci bag, and sporting her own jewels. At the same event,
Molly Sims (in Missoni and carrying a Jimmy Choo clutch) gossips with Sarah
Jessica Parker who was wearing a silk jacquard dress and coat by L’Wren
Scott, jewels by Verdura, and Christian Louboutin for L’Wren Scott shoes.
Over at the HBO party, Chloe Sevigny was stunning in YSL and some
fantastically kinky black lace up platforms. Back at In Style, super stylist
Rachel Zoe was a knockout in shimmering orange Halston (she’s flanked by
Sims and Joy Bryant in a Fendi dress and Dolce & Gabbana shoes).

The friendly Desperate Housewives kicked up their heels at In Style as well,
with Eva Longoria in navy Emanuel Ungaro and H. Stern jewels, Felicity
Huffman in Elie Saab, and Nicolette Sheridan shod by Stuart Weitzman but
otherwise currently channeling Hollywood Barbie. Jamie King went for
white-the night’s most popular color-by Diane von Furstenberg and a vintage
fur while Mischa was a midnight counterpoint in a Fendi frock, Brian Atwood
shoes, and Roger Vivier clutch. Finally, one of our favorites gals, Ginnifer
Goodwin, was a golden girl in her choice of copper Dolce & Gabbana